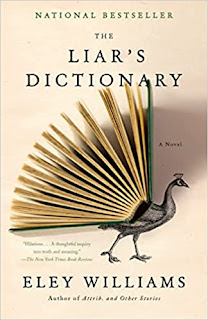 Talk About Books meets every third Wednesday at 6:30. There is a choice of attending via zoom or coming to the Library. Dictionaries tend to be utilitarian, unglamorous things—pulled off of a shelf when needed, but otherwise gathering dust, especially as readers turn to digital resources. But in the preface of her debut novel, The Liar’s Dictionary , Eley Williams shrugs off that drab image, inviting readers through her spry language to imagine their own perfect dictionary and all the tangibles and intangibles it would possess. The structure of the book even mimics a dictionary, with a chapter for every letter of the alphabet, beginning with “A” for “artful” and “Z” for the tongue-twisting “zugzwang.” This invitation to see dictionaries as playgrounds and words as chewing gum sets a jovial yet cerebral tone that suits the stories of the two main characters, doubles living a century apart. In the modern day, Mallory is an intern at the struggling Swansby House, publisher o
Post a Comment
Read more 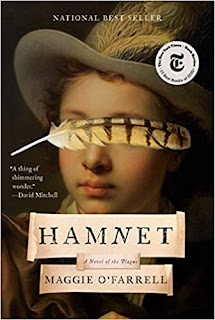 Talk About Books meets every third Wednesday at Guilford Free Library at 6:30. If this book appeals to you, contact the library for a copy and join in on our discussion in the New Year, January 19, 2022.  “Hamnet”  by Maggie O'Farrell, is an exploration of marriage and grief written into the silent opacities of a life that is at once extremely famous and profoundly obscure." [ The editors of The Book Review chose this as one of the 10 best books of 2020 . ] Countless scholars have combed through Elizabethan England’s parish and court records looking for traces of William Shakespeare. But what we know for sure, if set down unvarnished by learned and often fascinating speculation, would barely make a slender monograph. As William Styron once wrote, the historical novelist works best when fed on short rations. The rations at Maggie O’Farrell’s disposal are scant but tasty, just the kind of morsels to nourish an empathetic imagination. We know, for instance, that at th
Post a Comment
Read more

December 2021 Book, The Murmer of Bees 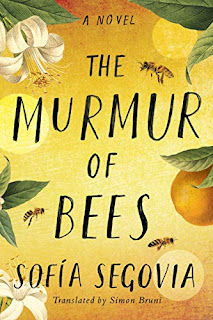 Talk About Books meets every third Thursday of the month at the Guilford Free Library at 6:30. In The Murmur of Bees, Mexican author Sofia Segovia combines a subtly magical atmosphere and unique, yet believable characters with kinetic narration to craft a story with broad appeal. From his birth in 1910, it is clear there is something unusual about Simonopio Morales. It isn’t just the birth defect which disfigures the infant’s face and robs him of speech – when old Nana Reja finds the little boy abandoned under a bridge in Linares, Mexico, Simonopio is blanketed by bees. Though some mutter that the child was disfigured by the devil’s kiss (or the devil himself) the Morales Cortéz family, a prosperous farming clan, adopts Simonopio to raise as their own. Over the ensuing years, the family witnesses marvelous events. Some, like the Spanish Flu of 1917, the 1910 Revolution’s land seizures, or a tenant’s jealousy, prove more tangible threats than demonic possession. Through it
Post a Comment
Read more

November 2021 Book, A Woman of No Importance 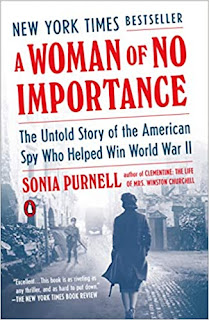 Talk About Books meets every third Wednesday of the month at 6:30 at Guilford Free Library. Contact the library to request a copy of this or any of our past monthly selections. To WWII Germans, it sounded like propaganda meant to misdirect: a lone foreigner running riot in occupied France, everywhere at once, unrecognizable despite a trademark gait, able to bewitch information out of anyone, single-handedly stirring up resistance — and then vanishing. The German secret police couldn't even be sure what country she was from. It would be easy to believe the Limping Lady wasn't real. But she was. Virginia Hall was one of the earliest Special Operations Executive agents Britain sent into occupied France to stir up resistance against the Nazi/Vichy regime, where she laid critical groundwork for an organized Resistance in southern France — and later led a cell herself. There have been other biographies, but Sonia Purnell's A Woman of No Importance is a grippi
Post a Comment
Read more 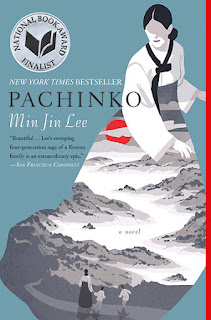 Talk About Books meets every third Wednesday of the month at 6:30 at Guilford Free Library.  On October 20, we will be discussing Pachinko by Min Jin Lee. Pachinko is an epic historical fiction novel following a Korean family that immigrates to Japan. The character-driven story features an ensemble of characters who encounter racism, stereotyping, and other aspects of the 20th-century Korean experience of Japan. Pachinko, for those not in the know, is one of the national obsessions of Japan, a dizzying cross between pinball and a slot machine, wherein small metal balls drop randomly amid a maze of brass pins. There's a comic feel of Rube Goldberg to the device, but the final effect is oddly mesmerizing. The urge to play can quickly become an addiction, and of course the game is a perfect metaphor for the ricochet whims of fate.  Owning pachinko parlors becomes a way for the clan depicted in the novel to climb out of poverty — but destiny cannot be manipulated so easily.
Post a Comment
Read more

September 2021 Book, The Vanishing Half

Talk About Books meets every third Wednesday of the month at 6:30 at the Guilford Free Library. All are welcome. Spanning nearly half a century, from the 1940s to the 1990s, the Vanishing Half focuses on twin sisters, Desiree and Stella Vignes, who were raised in Mallard, Louisiana, a (fictional) small town conceived of by their great-great-great grandfather — after being freed by the father who once owned him — as an exclusive place for light-skinned blacks like him. "In Mallard, nobody married dark," Bennett writes starkly. Over time, its prejudices deepened as its population became lighter and lighter, "like a cup of coffee steadily diluted with cream." The twins, with their "creamy skin, hazel eyes, wavy hair," would have delighted the town's founder. Yet fair skin did not save their father, whose vicious lynching by a gang of white men marks the girls irrevocably. Nor did it save their mother from an impoverished existence cleanin
Post a Comment
Read more

August 2021 Book, Blessed are the Cheesemakers 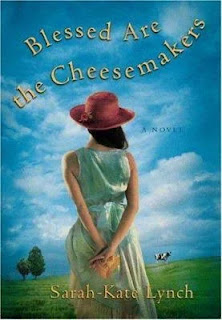 The August discussion will take place on August 18  at 6:30 at the Guilford Free Library.  Talk About Books meets every third Wednesday of the month. Sarah-Kate Lynch's novel is set on a small Irish dairy farm. It follows two lost souls as they try to carve out new lives amid a colorful cast of characters. Abby has been estranged from the family farm since her rebellious mother ran off with her when she was a small child. Kit is a burned out New York stockbroker who's down on his luck. But that's all about to change, now that he and Abby have converged on the farm just in time to help Corrie and Fee, two old cheesemakers in a time of need. Full of delightful and quirky characters--from dairy cows who only give their best product to pregnant, vegetarian teens to an odd collection of whiskey-soaked men and broken-hearted women who find refuge under Corrie and Fee's roof -- Blessed are the Cheesemakers is an irresistible tale about taking life's spilled milk
Post a Comment
Read more
More posts